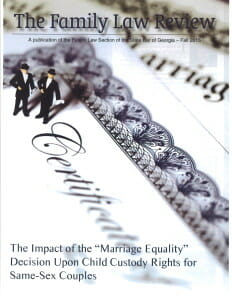 The recent “Marriage Equality” decision by the US Supreme Court (Obergefell v. Hodges) has left Georgia lawyers and Judges struggling to figure out how the state’s prior rules regarding child custody disputes should be applied to same sex couples who are separating. Georgia Lord recently authored a scholarly article addressing this topic for The Family Law Review, a professional journal for Family Law attorneys in Georgia.  A copy of that article can be seen HERE. As Lord explains in this article, for the short term, there will continue to be uncertainty regarding the extent to which many individuals who are or were in same-sex couples have standing to seek custody of the children born or adopted into those relationships. One factor which will likely be very significant is whether the parents entered into a state-licensed marriage before the child’s birth or adoption (whether in their state of residence or elsewhere). For now, the safest course of action for a nonbiological parent will, in most cases, continue to be adopting a child via a step-parent adoption.

Under the Obergefell decision, the State of Georgia must recognize a marriage between two people of the same sex when their marriage was lawfully licensed and performed out-of-State. The decision also requires the State of Georgia to issue licenses for marriages between two people of the same sex on the same basis that it would issue licenses authorizing marriages by spouses of different sexes.

Up until the decision was issued on June 26th, Georgia law refused to recognize the fact that some families include two parents of the same sex. In the pre-Obergefell legal landscape, custody litigation between LGBTQ individuals often hinged upon whether an individual who had functioned as a parent would be recognized as such under the prevailing rules of law, without regard to either the realities of the situation or the best interest of the child involved. A partner who lacked any legal standing was deemed a stranger to the child in the eyes of the law, and any claim they made for custody was subject to dismissal on that basis. Numerous Georgia statutes addressing an individual’s standing to seek custody have relied upon assumptions that no longer fit well for a significant number of existing situations: e.g., that a child can only have one biological mother, that a child cannot have two legal mothers or two legal fathers simultaneously, and that a marriage consists of a man and a woman. The result is that it is unclear whether and how particular statutory language will apply to same-sex relationships. None of us know at this point what governing principles will emerge from this blend of old and new rules. In The Family Law Review article, Georgia Lord  examines the existing lines of authority that appear to be the most relevant, and extrapolates the rules that seem most likely to emerge from them.

To listen to a recording of the U.S. Supreme Court’s oral argument in the Obergefell v. Hodges case, click HERE.