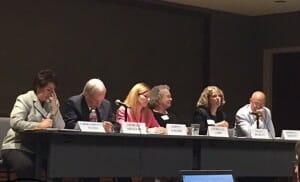 Georgia Lord also provided advice to prospective Guardians ad litem during the training. Guardians ad litem investigate custody disputes and make recommendations to the Judge regarding who will get custody. The Guardian works to provide the Judge with an objective assessment of which custody arrangement would best serve the child or children; she represents the “best interest” of the child or children whose custody is at issue. Lord is frequently appointed to serve as Guardian ad litem by local family court Judges.

During the final segment of the program, three local Judges shared their thoughts on issues that often arise in custody disputes. The participating Judges were Judge Jane Barwick and Judge Todd Markle of Fulton County and Judge J.P Boulee of DeKalb County. The reflections these Judges shared included:

Many attorneys who attended the seminar complimented both its organizers and the faculty upon the high quality of the presentations.