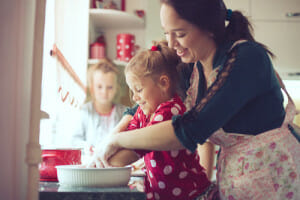 It is important to tell your children you are divorcing well before they hear about it from someone else.  Once the plans have been finalized and you know for sure you are going through with the divorce, it is time to sit down with the kids. Yes, “the Talk” is difficult, but it has to be done, and it is important that you do it the right way.  If at all possible, both parents should be there for the talk.

Try to be calm rather than emotional.  Don’t let them see that you are mad, scared or hurt.  Do not ask them to “decide” what you should do; the responsibility of deciding whether to end a marriage rests with the spouses, and should not be piled onto the shoulders of their children.  Reassure your children that:

You will need to repeat these assurances to your children as time goes by.

Both during your initial talk with your children, and later as the divorce process grinds along, be careful not to fall into any of these tempting traps: